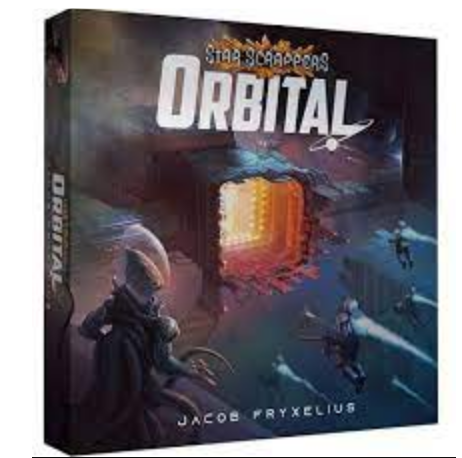 This game was crowdfunded on Kickstarter, and our special thanks go to each and every backer of the cam-paign We are very happy that you believed in us and extremely grateful for your generosity Star Scrappers: Orbital would not have happened without your immense support! Look forward to more games in the Star Scrappers Universe – they are coming!

The space industry is beginning to grow again after the Hy’Dran Wars! To encourage the development, interstellar foundations are awarding prizes to corporations that are outstanding in different areas. As the owner of one of these corporations, you compete to build the biggest, best, and most beautiful space station the worlds have ever seen…

Welcome to the Star Scrappers universe! Have a seat and get comfortable in the commander chair on an orbital – one of many space stations that are being constructed in the asteroid belt called the Sybil Cloud Deposits of Hexis – the most desired mineral in the entire Galaxy – have been discovered there, attracting numerous dare-devils willing to extract the precious crystals Miners have to do business and enjoy themselves somewhere, so you and your corporation are here to provide them with accommodation and, naturally, to get rich!

Terrons, the orbital builders, are descendants of the humans who came to this galaxy a long time ago Over a thousand years, united in the Interstellar Terron Federation, they have colonized many corners of the universe The democratic system of the Terron society has encouraged the creation of many inde-pendent structures, such as corporations, commercial consortiums and mercenary guilds By making con-tact with different alien species, they have caused their civilization to flourish and their influence to spread At the base of their success lies ambition Ambition that knows no bounds This trait of character drives Terrons ever forward, to conquer new territories, to discover the unknown, to push the frontier of the Federation another step further Their military forces are well-known across the Central Sector, as they strike fear in the hearts of alien beings inhabiting the Galaxy They became famous during the two Hy’Dran Wars, proving unshaken and well-trained Even now, in times of peace, the Terron fleet remains ready to defend their territories And their businesses

OTHER INHABITANTS OF THE
GALAXY
In the distant future, countless alien species explore the Galaxy in search of fortune and fame The last interstel-lar war with the Hy’Dran Empire ended over fifty years ago and since then peace treaties have been in power Newly discovered cosmic nations, like the cybernetic Bioss and the expansive Weedlocks, are beginning to influence the fate of the Galaxy, while the inhabitants of ancient planets, such as the mechanical Metanels and the mysterious Minegglers, are once again striving to achieve their goals 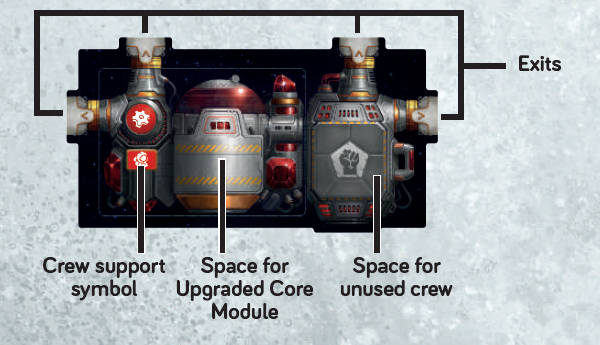 The game spans 5 years (rounds), marked on the Year card by the Year marker
In Star Scrappers: Orbital, each player builds their own orbital, starting with a Structural Core Module During the game, they take turns doing one action at a time: build modules to expand their orbitals, play event cards, make repairs, buy cards from the market, and operate their modules When everyone has passed consecutively (usually because they run out of cards or money), the year ends and Victory Points (VPs) are awarded to the players with the most non-damaged modules in each color Then each player gets new crew, money, cards, and starts the next year
There are 6 kinds of modules that each have their own color and theme:

GAME ROUND (YEAR)
During a game round, the players take turns taking actions until everyone passes On your turn, you can only take 1 of the following actions:
Build. Price: 6 MC. 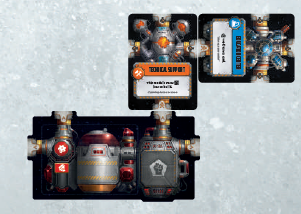 Purchase. Price: 1-5 MC.
Purchase one of the cards from the market to your hand. The card furthest away from the deck costs 1 MC, the next one 2 MC, and so on, and finally 5 MC for the card closest to the deck. When a card is purchased, the remaining cards are moved toward the deck to close the gap and form a new row where the cards now cost 1-4 MC, and so on. The market card furthest away from the deck always costs 1 MC. 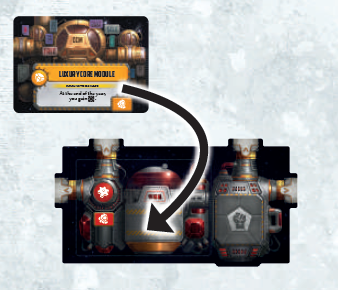 » Operate
Use the action indicated on one of the non-damaged modules on your orbital. Pay the cost (crew/money) indicated before the arrow, and get the effect indicated after the arrow. Take the required number of crew from the Core Module and place them on the operated module. The crew and the module may only be used once per year. Note that modules that have no arrow printed in the text box are always active and don’t require any action or additional payment 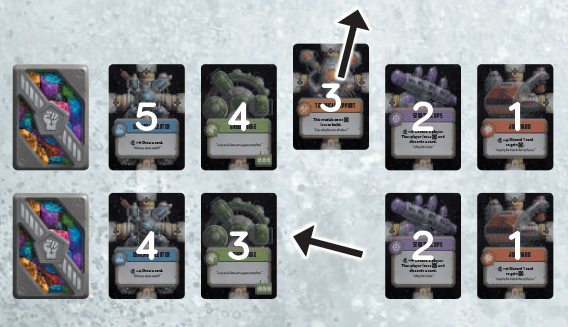 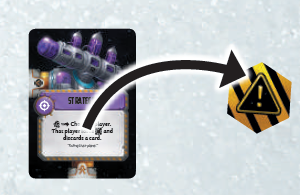 Remove 1 damage token from one of your modules.

If you pass on your turn, you can still take actions later, but if all players pass consecutively, the year ends immediately and no more actions can be taken. If you can’t do anything else, passing is your only option

» Damage: When a module is damaged as a result of a card effect, put a damage token on it. A damaged module may not use its color, ability, crew support symbols, and you may not connect new modules to it while damaged. For example, it doesn’t count towards getting VPs, income, and crew at the end of the year. A module may be damaged multiple times, adding more damage tokens to it. Multiple Repair actions are then needed to repair it (or wait for the Maintenance step at the end of the year to remove all tokens at once). Core Modules (both Structural and Upgraded ones) cannot ever be damaged. A module connected to a damaged module is not affected and may be used normally.

»» Exterior module: A module that has no other modules built onto its exits is called an exterior module. A module without any printed exits is always exterior. These modules are more exposed and may be targeted by the Meteor Storm event card or the Weapon Platform action.
» Remove: If you are instructed to remove a game component from its current location, it means the component is lost and has no effect anymore. Crew and tokens go back to their respective pools (you get new crew as normal at the end of the year), while removed modules are discarded. 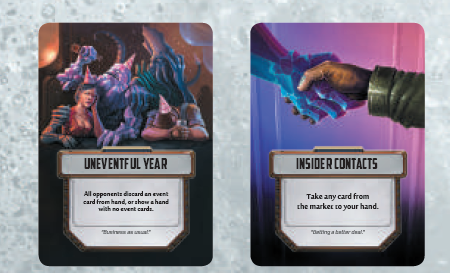 Competitive (Bot) Version: This solo variant uses 2 bot players to play against. The bot players are handled by the bot algorithm and follow the normal rules with just a few exceptions, as detailed  below. Use the normal setup and rules for a 3-player game with the following exceptions: 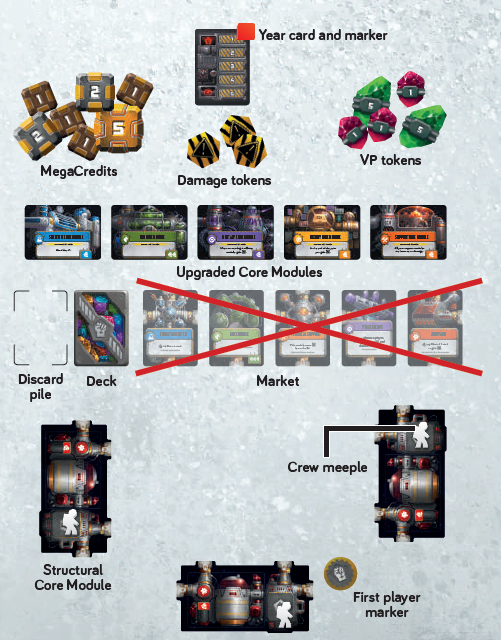 »» No market is used in this version.
»» Each bot starts each year with 5 cards in “hand” (a face-down stack).
»» A bot targeted by the Uneventful Year event card discards the top card from its hand stack.
»» The Insider Contacts event card makes you draw 2 cards from the deck instead of taking 1 from the market.

Bot turn algorithm:
On its turn, the bot will act with the following priority:

This solo version uses 2 simplified “opponents” that are outside of play and only determine what is required for gaining the VPs that you compete for. You play alone and you have many strategic options at your disposal;
this variant will test your building skills! Setup: Remove all event cards from the deck. Use the backsides of 2 Core Module tiles as your two opponents. The tracks represent how many modules they have of each color – what you have to compete with! Place a crew on the starting space of each track (marked with a symbol, it represents value “0”), except for red, where they start at “1”, just like you start with 1 red Core Module. Gameplay: When you draw your starting cards or draw cards at the end of each year, also draw and discard 3 cards for each of your opponents. That opponent “builds” those modules – increase the corresponding tracks. This happens before you discard cards if you have too many. The opponents do not get any resources and they do not take any actions during the game. You play your turns as normal, but the effect of your cards can’t target the opposing orbitals. After 5 years, you add up your VPs, and if you score at least 22, you win! 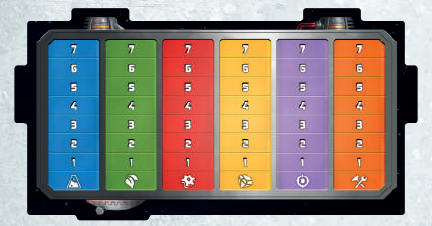 
Setting up HEXY STUDIOS HEXYBG005 Star Scrappers Orbital Instruction Manual is easy with these step-by-step instructions. Follow the steps are you are set-up in no time.

Using HEXY STUDIOS HEXYBG005 Star Scrappers Orbital Instruction Manual is simple by using this manual. Follow the instructions one by one and everything will be fine

Is HEXY STUDIOS HEXYBG005 Star Scrappers Orbital Instruction Manual stuck or not working properly? By resetting it you can set it back to the standard settings and everything should be back to normal. This works in many cases when problems arise.

All symbols, colors and codes for HEXY STUDIOS HEXYBG005 Star Scrappers Orbital Instruction Manual are explained in this instruction manual. You can find everything you need and moree