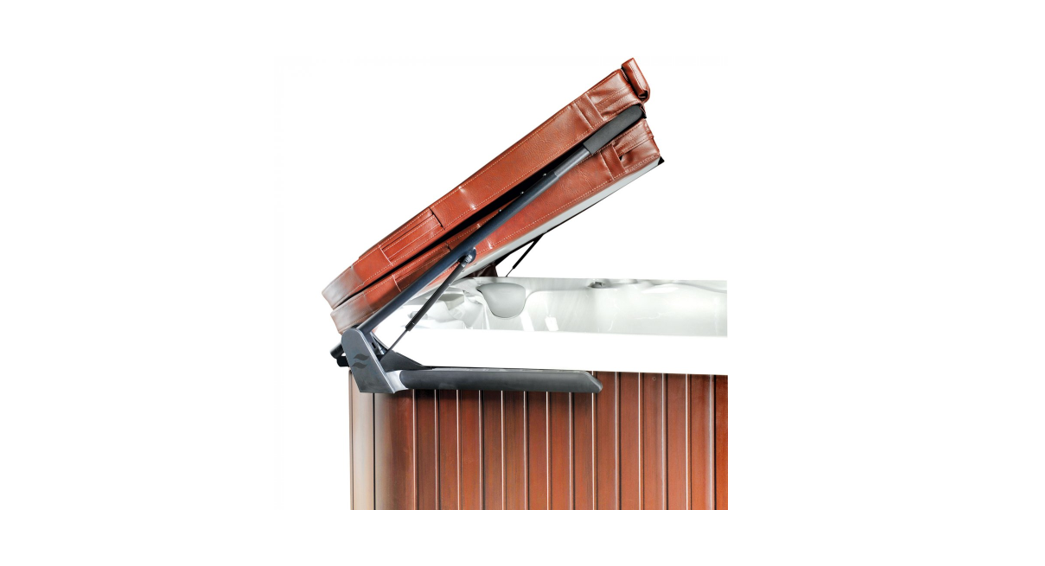 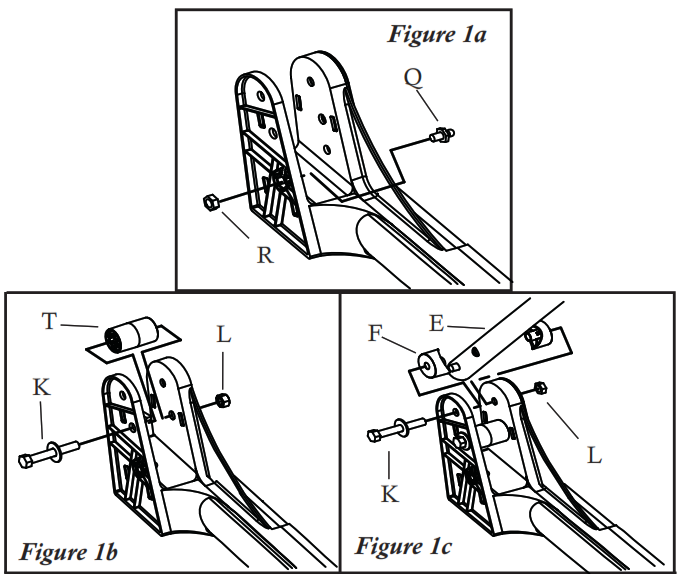 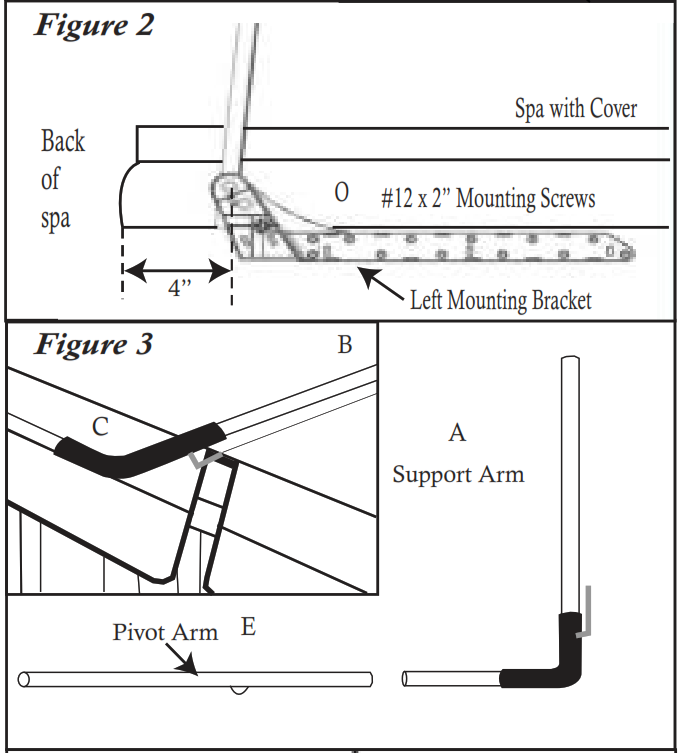 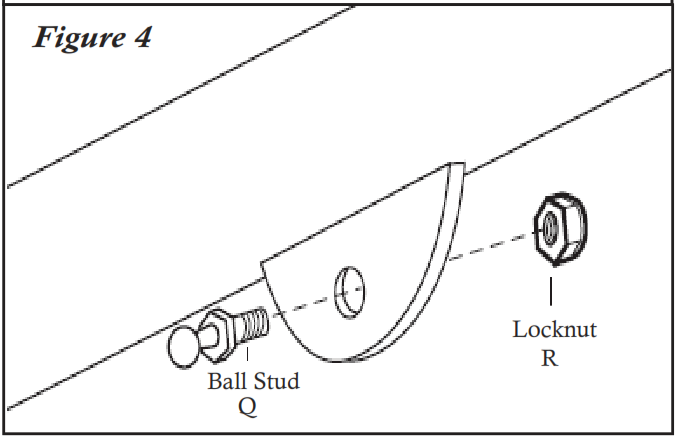 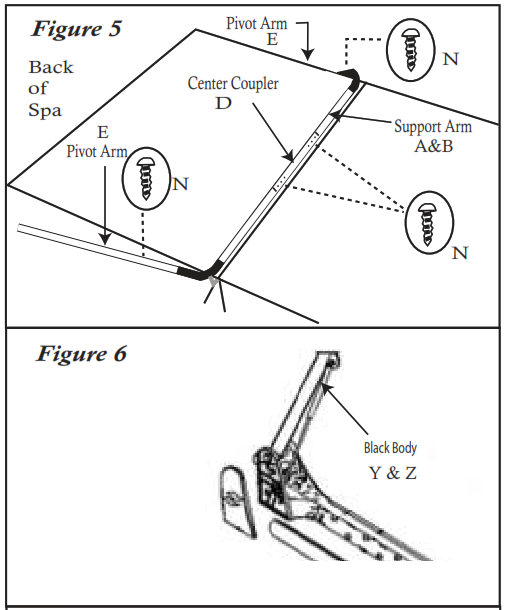 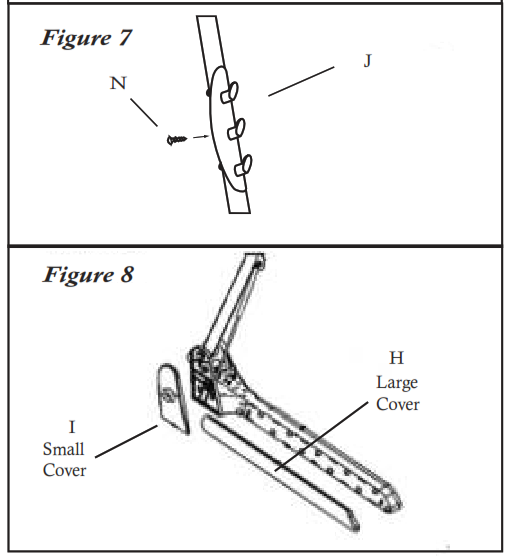 Installation Instructions – Updated as of 07/03/18
Step #1
Position the spa cover (in closed position) on the spa making sure that all four corners are properly positioned and square on the spa.
Step #2
Install the ball studs on each mounting bracket. Note: Make sure the ball is pointing towards the spa (see Fig. 1a).
Step #3
Install the plastic stop on each mounting bracket (see Fig.1b). Note: Lightly tighten bolt assembly, overtightening will cause plastic to disfigure, not allowing the cover plates to snap on properly.
Step #4
Using the #12 x 2” screws, attach the left and right mounting brackets to the appropriate sides of the spa. Brackets should be mounted 4” from the back of the spa, directly beneath the lip of the spa (see Fig. 2). The pivot arm bolt hole in the bracket is measured in from the back of the spa 4”.
Step #5
Starting with the left side first, lay the long end of the cover support arm on the top of the cover, lying parallel to the spa cover hinge about 1/2” away. Slide the U-shaped retainer clip between the two cover halves with the horizontal part touching the underside of the cover hinge. Note: Do not insert the U-shaped retainer clip in between the seams of the spa cover. (see Fig. 3) With the left support arm lying on the cover, slide the straight coupler piece over the long end of the left cover support arm. Next, slide the long end of the right support arm into the center coupler and slide the U-shaped retainer clip between the two cover halves.
Step #6
Slide the left and right pivot arms onto the short end of the support arms (see Fig. 3). Note: Do not insert self-tapping screws at this time, this will be completed in step #8.  Next, connect the pivot arms to the brackets (see Fig. 1c). Be sure to run the hex cap bolts as pictured. Lightly tighten the nut so the pivot arm can move freely.
Step #7
Next, install the ball studs to the left and right pivot arms. Place the two hex dome caps over the ball stud locknuts. Note: Be sure that the ball is pointing away from the spa (see Fig. 4).
Step #8
With the coupler piece and support arms adjusted properly (about 1/2” away from cover hinge and centered on spa), using the #10 self-tapping screws, fasten the support arms to the pivot arms and the center coupler piece to the support arms (see Fig. 5). Note: Be sure to rotate the coupler piece so that the inserted screws are at a horizontal angle with the screw head facing the back of the spa.
Step #9
Using the Covermate, lift the cover off the spa and place it in the upright position. Snap the gas shocks on the ball studs. Note: Be sure to install gas shocks with the black body on top (see Fig. 6 for complete look). Note: You may need to pull back on the pivot arm a small amount to be able to attach the shock to the pivot arm.
Step #10
Attach the provided 3 hook TowelMate on the preferred side of your Covermate by simply snapping it into place and inserting the middle self-tapping screw (see Fig. 7).
Step #11
Snap-on the left and right bracket covers (small and large covers) (see Fig. 8).

Operation of the Covermate III Plastic

1. Fold the first half of the spa cover off the spa. Gripping the foam grip, motion the spa cover into its vertical upright position.
2. Important: When closing the spa cover, always make sure to unlock the shock by pushing on the orange stop before pulling the Covermate down to prevent possible lift damage.
CAUTION! Do not use the Covermate in high wind conditions. Injury from the spa cover being blown over and impacting the spa user can occur.


Setting up Leisure Covermate III Side Mount Spa Cover Lift Installation Guide is easy with these step-by-step instructions. Follow the steps are you are set-up in no time.

Using Leisure Covermate III Side Mount Spa Cover Lift Installation Guide is simple by using this manual. Follow the instructions one by one and everything will be fine

Is Leisure Covermate III Side Mount Spa Cover Lift Installation Guide stuck or not working properly? By resetting it you can set it back to the standard settings and everything should be back to normal. This works in many cases when problems arise.

All symbols, colors and codes for Leisure Covermate III Side Mount Spa Cover Lift Installation Guide are explained in this instruction manual. You can find everything you need and moree