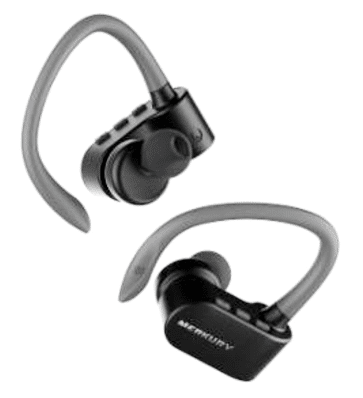 When low on power, a tone will be heard and the earbuds’ LED indicators will flash RED to indicate that they need to be recharged.

Charging the Earbuds
Use the included charging case to protect and charge the earbuds as described below.

When paired to a Bluetooth device, volume adjustment & playback can be controlled with your paired device or with the earbud controls below.

Answering/Ending Phone Calls
To use the earbuds’ phone functions, you must be paired to a Bluetooth-enabled device. Once paired, you can control phone functions with earbud controls listed below.

Re-Pairing the Earbuds
The MERKURY E038T earbuds should pair to each other automatically when powered ON. If the earbuds come un-paired from each other or only one earbud pairs to your device, try following these instructions to re-pair:

Caution: Any changes or modifications to this device not explicitly approved by manufacturer could void your authority to operate this equipment. This device complies with part 15 of the FCC Rules. Operation is subject to the following two condition,

The device has been evaluated to meet general RF exposure requirement. The device can be used in portable exposure condition without restriction.


Setting up Merkury E038T Sport Wireless Earbuds Manual [XO-9922-1] is easy with these step-by-step instructions. Follow the steps are you are set-up in no time.

Using Merkury E038T Sport Wireless Earbuds Manual [XO-9922-1] is simple by using this manual. Follow the instructions one by one and everything will be fine

Is Merkury E038T Sport Wireless Earbuds Manual [XO-9922-1] stuck or not working properly? By resetting it you can set it back to the standard settings and everything should be back to normal. This works in many cases when problems arise.

All symbols, colors and codes for Merkury E038T Sport Wireless Earbuds Manual [XO-9922-1] are explained in this instruction manual. You can find everything you need and moree