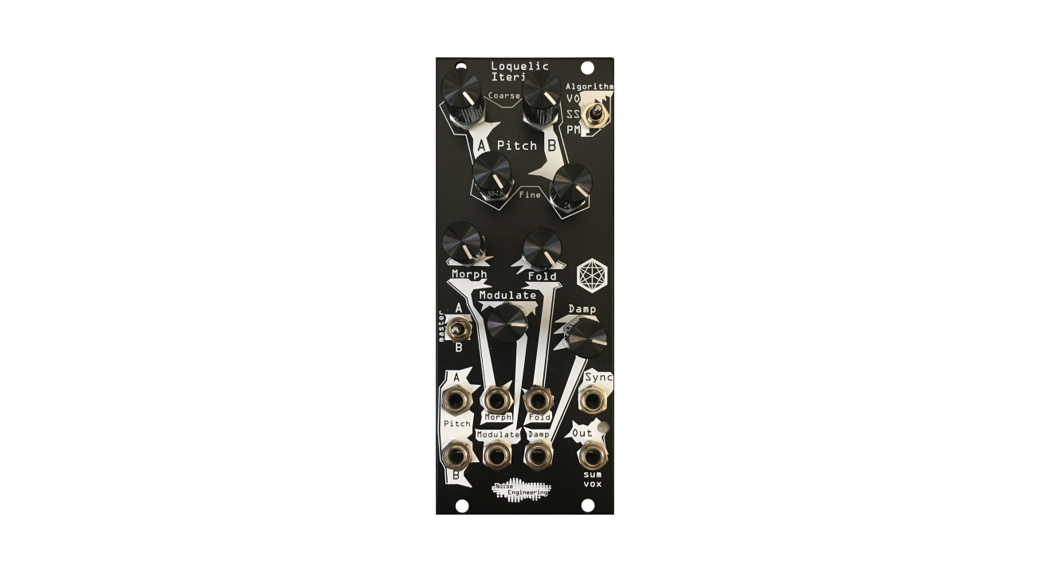 “I could kill someone with that” — DJ Surgeon
“This thing sounds fucking amazing lots of stuﬀ I’ve never heard before” — Surachai
Loquelic Iteritas is a digital VCO with interpretations of three classic synthesis algorithms involving dual pitch control. It creates a huge variety of sounds parameterized by four tone and two pitch controls. 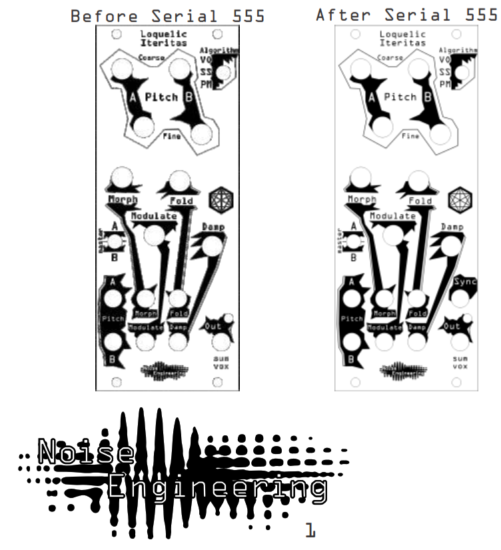 To power your Noise Engineering module, turn oﬀ your case. Plug one end of your ribbon cable into your power board so that the red stripe on the ribbon cable is aligned to the side that says -12v and each pin on the power header is plugged into the connector on the ribbon. Make sure no pins are overhanging the connector! If they are, unplug it and realign.
Line up the red stripe on the ribbon cable so that it matches the white stripe and/or -12v indication on the board and plug in the connector.
Screw your module into your case BEFORE powering on the module. You risk bumping the module’s PCB against something metallic and damaging it if it’s not properly secured when powered on.
You should be good to go if you followed these instructions. Now go make some noise!
A final note. Some modules have other headers — they may have a different number of pins or may say NOT POWER. In general,
unless a manual tells you otherwise, DO NOT CONNECT THOSE TO POWER.

Noise Engineering backs all our products with a product warranty: we guarantee our products to be free from manufacturing defects (materials or workmanship) for one year from the date a new module is purchased from Noise Engineering or an authorized retailer (receipt or invoice required). The cost of shipping to Noise Engineering is paid by the user. Modules requiring warranty repair will either be repaired or replaced at Noise Engineering’s discretion. If you believe you have a product that has a defect that is out of warranty, please contact us and we will work with you.
This warranty does not cover damage due to improper handling, storage, use, or abuse, modiﬁcations, or improper power or other voltage application.
All returns must be coordinated through Noise Engineering; returns without a Return Authorization will be refused and returned to sender.
Please contact us for the current rate and more information for repairs for modules that are not covered by our warranty.

The easiest way to get to know Loquelic Iteritas is to turn the knobs and listen. Connect the output to your mixer and start twiddling.
Loquelic Iteritas is about continuous tone control. Hook any LFO up to any of the four tone control inputs (Morph, Fold, Modulate, Damp).
Other interesting eﬀects can be created by controlling the pitches independently (by default the 1v/8va inputs are normaled to each other). For instance, using a Tonnetz Sequent to produce musical intervals produces interesting results.

Loquelic Iteritas can run it’s processor on the 5V eurorack power rail treduce noise and load on the 12V bus. There are three diﬀerent versions of the CPU board two which use a switch to select and one which uses a jumper. For the swtich versions gently push the switch tab in the direction of the desired rail to use. For the jumper version put the
jumper from the center pin to the pin marked with the rail that is desired. 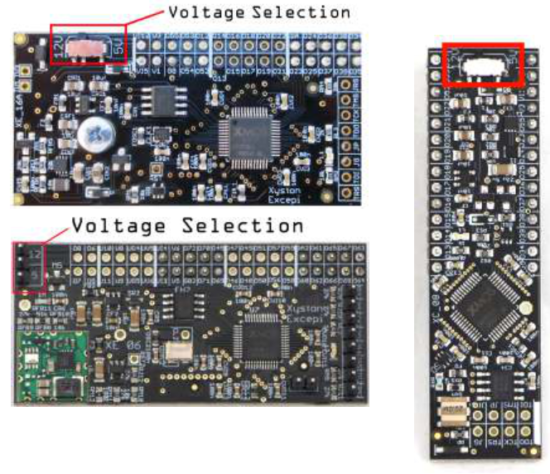 The VO algorithm is roughly based oﬀ of the VOSIM algorithm which I discovered while reading Curtis Roads’s epic Microsounds. This algorithm amplitude modulates a carrier by an exponential to create a more complex harmonic structure. The simplest carrier is a sinusoid which produces a spectrum with a Gaussian distribution centered on the carrier. More complicated waveforms produce Gaussians around each harmonic, producing spectra similar to comb ﬁltered noise.
Pitch A is the fundamental frequency of the carrier. Pitch B is the retrigger frequency of the exponential decay.
Interface
MORPH – changes the waveform of oscillator A
DAMP – sets the decay constant on oscillator B relative to its period
MOD – phase modulates oscillator A by oscillator B
FOLD – sets the wave fold threshold on the ﬁnal wave folder
References
Kaegi, Werner, and Stan Tempelaars. “Vosim-a new sound synthesis system.” Journal of the Audio Engineering Society 26.6 (1978): 418-425. Roads, Curtis. Microsound. MIT press, 2004. 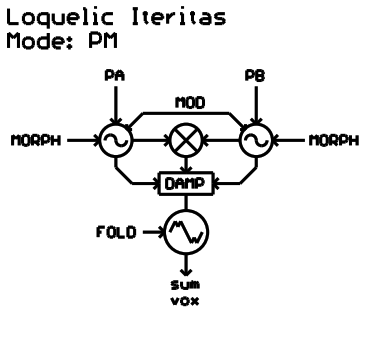 Algorithm SS is a highly modiﬁed version of summation synthesis originally developed by James Moorer. The premise comes from a simple mathematical equality between an inﬁnite harmonic series and a relatively easy to compute expression. Original equation:

MORPH – changes the waveform of all oscillators
DAMP – sets the a parameter in the equality. This controls the generated spectra with higher values producing higher power harmonics.
MOD – phase modulates oscillator A by oscillator B
FOLD – sets the wave-fold threshold on the ﬁnal wave folder 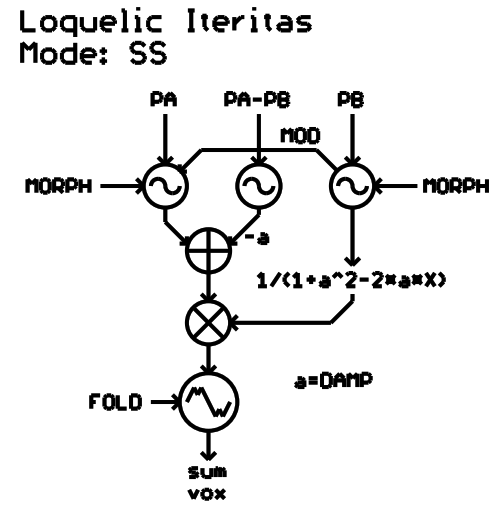 The PM algorithm is a naive time-domain two-oscillator phase-modulation implementation that combines both oscillators with amplitude modulation.
Interface
MORPH – changes the waveform of both oscillators
DAMP – blends between oscillator A and B through their product (AM)
MOD – phase modulates the oscillators by each other
FOLD – sets the wave-fold threshold on the ﬁnal wave folder 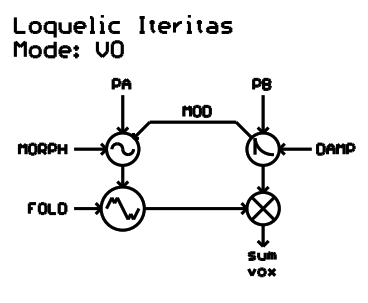 Loquelic Iteritas uses a unique multisampling technique to make aliasing more musical. By choosing a particular sample rate for a waveform that has a harmonic structure (all overtones are integer multiples of the fundamental) the alias power can be moved into frequencies that are also multiples of the fundamental and therefore more musical.
This gets complicated when synthesizing two oscillators at diﬀerent pitches but using the same DAC. The compromise that Loquelic Iteritas makes is to give up the notion of a ﬁxed sample rate and compute a time delay between samples based on both oscillators. For the single oscillator case, this delay is based entirely on pitch. If this delay is computed based on each oscillator’s pitch, both sample rates can be interleaved by checking which oscillator’s delay will be up ﬁrst. This oscillator is then updated to its next timestep and an output value is computed based on both oscillator’s output state. This makes no guarantees about exactly where the aliasing goes. It is an attempt to make the aliasing related in some way to the fundamental pitch. 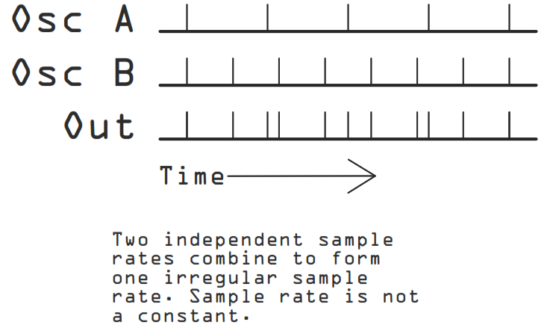 Loquelic Iteritas has been in development for over two years. It was started at the same time as Basimilus Iteritas but has taken much longer to mature. Originally it was just a simple implementation based on VOSIM but I soon realized I could pack a lot more punch in this form factor and found two additional algorithms. Loquelic Iteritas was
designed to be a functional oscillator for sound designers as well as for musicians. I wanted to maximize the possible sound space given the input controls going from simple calm sounds to extreme, even broken, sounds. The priority of tonal variance led to some sacriﬁces on the musical side such as the total pitch range.
The algorithms used are quite simple and are intentionally left naive as  they often include interesting rough spots. For example, PM mode hasa nasty half-sample-rate self oscillation under high modulation indexes that, when combined with the irregular sample rate, produces interesting, if quite harsh, results.

For reference I have included the core synthesis code for each algorithm. I am constantly amazed at how much sound variety such simple algorithms can produce and hope that others will appreciate their simplistic beauty. Note: code superﬂuous to the core algorithm has been removed.


Setting up Noise Engineering N13-4951 Loquelic Iteritas Complex Digital Oscillator User Manual is easy with these step-by-step instructions. Follow the steps are you are set-up in no time.

Using Noise Engineering N13-4951 Loquelic Iteritas Complex Digital Oscillator User Manual is simple by using this manual. Follow the instructions one by one and everything will be fine

Is Noise Engineering N13-4951 Loquelic Iteritas Complex Digital Oscillator User Manual stuck or not working properly? By resetting it you can set it back to the standard settings and everything should be back to normal. This works in many cases when problems arise.

All symbols, colors and codes for Noise Engineering N13-4951 Loquelic Iteritas Complex Digital Oscillator User Manual are explained in this instruction manual. You can find everything you need and moree