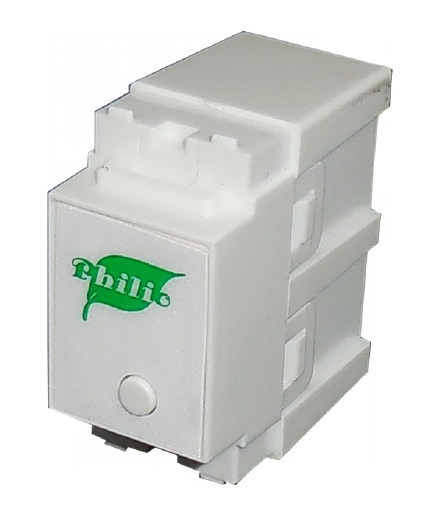 This plug-in ON/OFF switch PAN10 is a security enabled wireless switch, based on Z-Wave Plus technology. Z-Wave PlusTM enabled devices displaying the Z-Wave PlusTM logo can also be used with it regardless of the manufacturer, and can also be used in other manufacturer’s Z-WaveTM enabled networks. Remote On/Off control of the connected load is possible with other manufacturer’s wireless Controller. Each switch is designed to act as a repeater. Repeaters will re-transmit the RF signal to ensure that the signal is received by its intended destination by routing the signal around obstacles and radio dead spots. Because PAN10 supports Security Command Class, it can learn with Secured controller. Its functionality and supported command classes is identical when included as a secure and non-secure device.

This plug-in ON/OFF switch is able to detect instance wattage and overload current (12A with resistive load) of connected lights or appliances. When detecting overload state, the Switch will be disabled and its On/Off button will be lockout of which LED will flash quickly. However, unplug and re-connect the switch will reset its overload condition to normal status.
Safety Precautions and Installation

Before proceeding with the installation, TURN OFF THE POWER TO THE LIGHTING CIRCUIT AT THE CIRCUIT BREAKER OR FUSE BOX TO AVOID ELECTRICAL SHOCK.

Specifications are subject to change and improvement without notice. 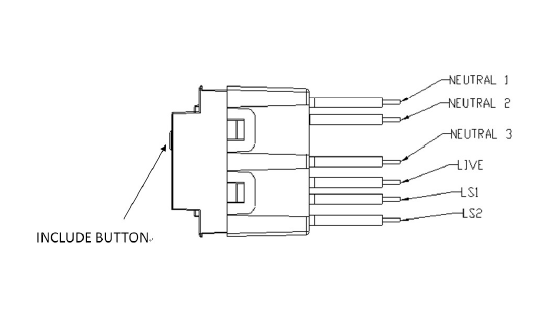 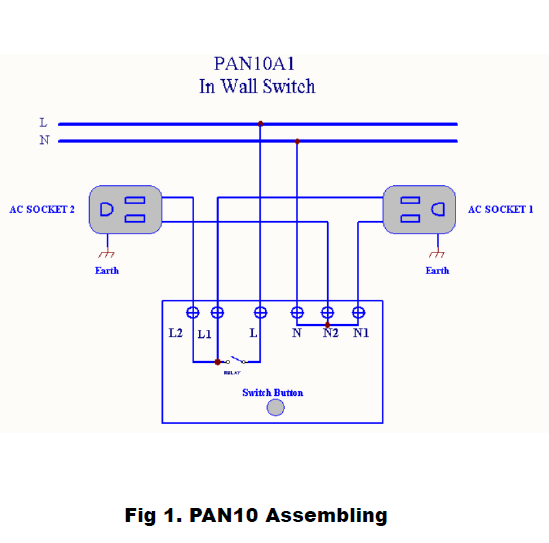 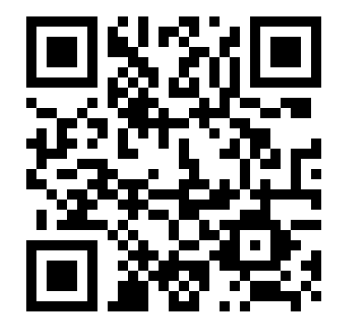 All works on the device may be performed only by a qualified and licensed electrician. Observe national regulations.
Any works introducing changes into the configuration must be always performed with disconnected voltage.
Choosing a Suitable Location

Adding to Z-WaveTM Network
In the front casing, there is an On/Off button with LED indicator which is used to toggle switch on and off or carry out inclusion, exclusion, reset or association. When first power is applied, its LED flashes on and off alternately and repeatedly at 0.5 second intervals. It implies that it has not been assigned a node ID and start auto inclusion.

Auto Inclusion
The function of auto inclusion will be executed as long as the switch does not have Node ID and just plug the switch into a wall outlet.
Note: Auto inclusion timeout is 2 minute during which the node information of explorer frame will be emitted once several seconds. Unlike “inclusion” function as shown in the table below, the execution of auto inclusion is free from pressing the On/Off button on the Switch.
The table below lists an operation summary of basic Z-Wave functions. Please refer to the instructions for your Z-WaveTM Certificated Primary Controller to access the Setup function, and to Add/Remove/Reset/Associate devices

LED Indication
To distinguish what mode the switch is in, view from the LED for identification.

1-2 BASIC_SET / SWITCH_BINARY_SET
Upon receipt of the following commands from a Z-Wave Controller, the load attached to the Switch will turn on or off.

1. Z-Wave’s Groups (Association Command Class Version 2)
The Switch can be set to send reports to associated Z-Wave devices. It supports one association group with one node support for Grouping 1. For group 1, the Switch will report its latest status to Z-Wave Controller.
Grouping 1 includes, SWITCH_BINARY_REPORT, METER_REPORT,
ALARM_REPORT.

Instant Power Consumption vary over 5% report
When the power consumption of load vary over 5%, it will send Meter report to the nodes of Grouping 1.

Overload alarm report
When PAN10 detects the current is more than 12A, it will send Alarm Report to Group 1 node.

Accumulated Power Consumption (KWh)
When receiving Meter Get Command, it will report Meter Report Command to the node.

KWH Meter Report Period
If the setting is configured for 1hour (set value =6), the PAN10 will report its Accumulated Power Consumption (KWh) every 1 hour to Group1 node. The maximum interval to report its Accumulated Power Consumption (KWh) is 227.55 days (10min*32767/1440=227.55 days). If the setting value is 0, the auto report function of meter KWh will be disabled.

Threshold of current for Load Caution

Threshold of KWh for Load Caution
This is a warning when the KWh of load over the preset threshold value, if the setting value is 10000, when the Accumulated Power Consumption of Relay1 over this value, PAN10 will send KWH meter report to warn the Group1 node, minimum value is 1KWh and default value is 10000 kWh.

Whenever the AC power return from lost, PAN10 will restore the switch state which could be SWITCH OFF、LAST SWITCH STATE、SWITCH ON. The default setting is LAST SWITCH STATE.

The On/Off function of learn switch can be disabled or enabled by this parameter, default value is Enable. But the learning operation won’t be affected. When man-ual On/Off function is disabled, the RF command can only switch On but not Off. This is useful function for keeping the device in switch on state.

Whenever PAN10 switches to on, the auto off timer begin to count down. After the timer decrease to zero, it will switch to off automatically. However if Auto off timer is set as 0, the auto off function will be disabled. The default setting is 0.

RF off command mode
Whenever a switch off command, BASIC_SET、BINARY_SWITCH_SET、 SWITCH_ALL_OFF, is received, it could be interpreted as 4 variety of commands.

Whenever PAN10 is manually switch on or off, it will send BINARY_SWITCH_ REPORT to the node of group1. The default setting is Enable the function.

PAN10 supports Protection Command Class version 2, it can protect the switch against unintentionally control by e.g. a child. And it can also protect the switch from being turned off by setting it in “No RF Control” state.
After being set to “Protection by sequence” state, any intentional pressing of On/Off button should be hold longer than 1 second, or the switch state will not change. However, the operation of learn function does not change, because learning will not be protected.

Firmware update over the air (OTA)

PAN10 is based on 500 series SoC and supports Firmware Update Command Class, it can receives the updated firmware image sent by controller via the Z-wave RF me-dia. It is a helpful and convenient way to improve some function if needed.

The Switch supports Command Classes including

This marking indicates that this product should not be disposed with other household wastes throughout the EU. To prevent possible harm to the environment or human health from uncontrolled waste disposal, recycle it responsibly to promote the sustainable reuse of material resources. To return your used device, please use the return and collection systems or contact the retailer where the product was purchased. They can take this product for environmental safe recycling.
Company of License Holder：Philio Technology Corporation
Address of License Holder：8F., No.653-2, Zhongzheng Rd., Xinzhuang Dist., New Taipei City 24257,Taiwan(R.O.C) www.philio-tech.com

This equipment has been tested and found to comply with the limits for a Class B dig- ital device, pursuant to Part 15 of the FCC Rules. These limits are designed to provide reasonable protection against harmful interfer-ence in a residential installation. This equipment generates, uses and can radiate radio frequency energy and, if not installed and used in accordance with the instructions, may cause harmful interfer-ence to radio communications. However, there is no guarantee that interference will not occur in a particular installa-tion. If this equipment does cause harmful interference to radio or television reception, which can be determined by turning the equipment off and on, the user is encour-aged to try to correct the interference by one of the following measures:

(1) This device may not cause harmful interference, and(2) This device must accept any interference received, including interference that may cause undesired operation. FCC Caution: Any changes or modifications not expressly approved by the party re-sponsible for compliance could void the user’s authority to operate this equipment. This transmitter must not be co-located or operating in conjunction with any other an-tenna or transmitter.


Setting up Philio PAN10 Switch Module with Meter User Manual is easy with these step-by-step instructions. Follow the steps are you are set-up in no time.

Using Philio PAN10 Switch Module with Meter User Manual is simple by using this manual. Follow the instructions one by one and everything will be fine

Is Philio PAN10 Switch Module with Meter User Manual stuck or not working properly? By resetting it you can set it back to the standard settings and everything should be back to normal. This works in many cases when problems arise.

All symbols, colors and codes for Philio PAN10 Switch Module with Meter User Manual are explained in this instruction manual. You can find everything you need and moree